Come along and have a look. Find out more about our open morning.

Pupils, past and present from Cundall Manor School’s Pre-Prep gathered to celebrate a milestone in the school’s history.

Originally known as The Orchard, the Pre-Prep of Cundall Manor School was opened in 1996 with only a handful of pupils in each year. Now, twenty years later, over 80 pupils attend Pre-Prep at the leading North Yorkshire independent school.

Amanda Kirby, Joint Head, said: “Today marks a very special milestone in the Pre-Prep’s history. We have such a special and unique environment that our pupils enjoy. It has been fun to look back on our journey and it has been a pleasure to see so many people come through the department who continue to develop, grow into successful young adults in Upper School and beyond.”

Pupils celebrated with a party, cake, games and even saw a special work of art unveiled to celebrate the occasion. The specially commissioned artwork from local artist, Daniel Watson, was delivered to the Pre-Prep house captains.

Ex-Pre-Prep pupils reminisced about their time in the department and enjoyed telling younger pupils about their experience of Pre-Prep and some even took time to find their names on the House Captain Board. 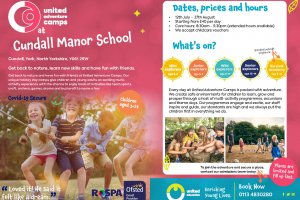